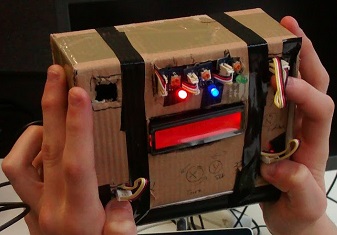 A prototype IoT game/toy. A Rasberry Pi with GrovePi sensors including touch sensors and a 6-axis accelerometer, code written in Python, designed to allow one player - the puzzler - to create a "puzzle" of set moves and positions with the accelerometer, which a second player - the solver - must then try to replicate as quickly as possible. I also created a second game mode, akin to Johann Sebastian Joust, where one person held the box and tried to keep it steady within a bounded set of axis and accelerometer values while others tried to knock them out of these.